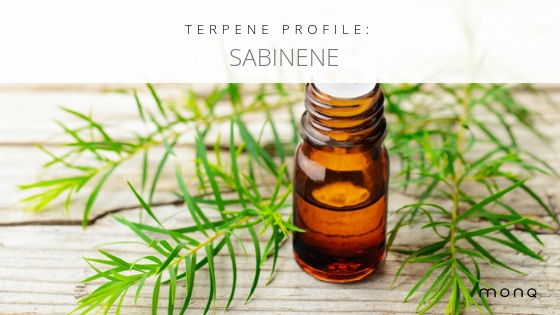 Sabinene is a secondary bicyclic monoterpene. Its smell is reminiscent of pines, oaks, and oranges, with spicy hints of black pepper.

Besides its pleasant aroma though, sabinene is believed to have wide-spanning potential in the medical field, especially in collaboration with other cannabinoids, and more particularly, CBD.

It’s important to note that most of the hyperlinked articles haven’t provided their medical sources. Some studies of botanicals containing sabinene, such as juniper and nutmeg, have pointed to medical benefits, but as with cannabis, given the complex chemistry of those plants,identifying the specific ingredient responsible for the physiological effects can be a challenge.

One of sabinene’s most touted benefits is its cramp-relieving properties. It has been thought to help with muscle spasms, and abdominal and menstrual cramps

Sabinene works together with other cannabinoids to reduce inflammation and arthritis pain, in addition to helping with lupus.

Sabinene also battles with bacteria, fungus and viruses by both preventing them from growing in the first place and helping them body get rid of them. [1,2] This application is considered to be particularly useful against Salmonella which causes food poisoning. [1]

Sabinene stimulates the production of saliva and thus helps digestion. In fact, it is sabinene that’s responsible for this effect of CBD oil for digestion.

Furthermore, sabinene helps open up the pores, triggering the process of perspiration which leads to sweating. While there are mixed reactions regarding whether sweating actually helps remove toxins from the body in sufficient quantities to be beneficial to one’s health, some people claim that that’s the case.If medical science proves this, sabinene would be a great natural alternative to prescription medication for detoxification.

Some believe sabinene can have adverse effects when taken in large quantities.

One source warned against sabinene being used for aromatherapy since it can release toxic fumes in the lungs if enough of the terpene is breathed in. Furthermore, it can cause blisters to the skin when used in high concentrations, despite being beneficial to it in low ones.

It’s also worth noting that sabinene is believed by some to have anaphrodisiac properties – the opposite of an aphrodisiac.

Sabinene may not be a well-known terpene, but don’t let that fool you. This terpene’s role is reminiscent of a producer who works away from the limelight; if CBD is Batman, then sabinene is Alfred. Sabinene helps other compounds do what they do best while sitting quietly in the corner. And that counts for a lot.