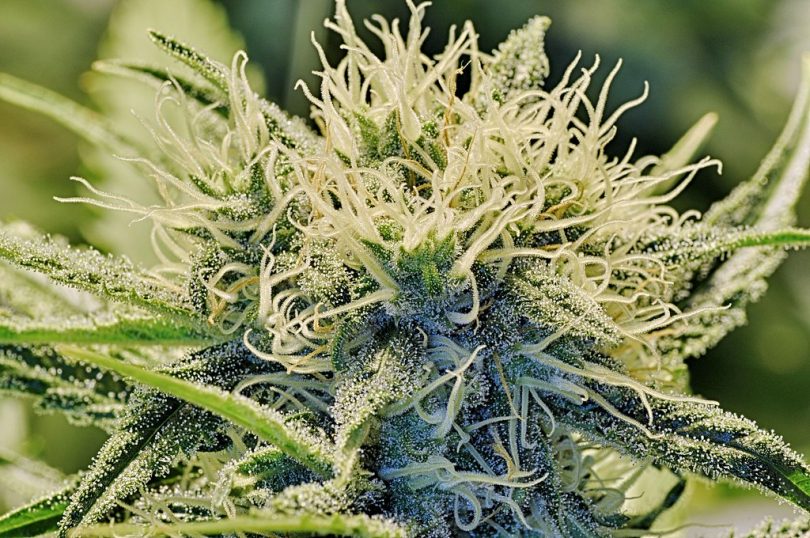 Populations of Cannabis can have males and females — called dioecious —, or they can be monoecious with individuals producing male and female flowers in the same plant. Usually, dioecy is determined by a pair of sex chromosomes. In Cannabis, as in most animals, males are the ones that have the X and Y chromosomes, so they are the heterogametic sex. The prefix ‘hetero’ comes from the Greek meaning ‘other’ or different. In other words, the males are the ones that carry the different sex chromosomes, and the Y chromosome in Cannabis is the largest of all the chromosomes in the genome, and therefore has the greatest number of letters. [1] Females on the other hand, are the homogametic sex, and again, the prefix ‘homo’ comes from the Greek meaning ‘same’. The females in Cannabis carry two X chromosomes.

Cannabis has multiple curious facts regarding its sex determination, at least for those who are not familiar with the plant. One of these curious facts is that there are monoecious populations which lack differentiated chromosomes. First, monoecious individuals are those that produce both male and female flowers in the same plant. Second, lacking differentiated sex chromosomes means that the sex chromosomes are not different from each other, which we do not entirely understand what that means for the plant yet, but we know that they can produce both male and female flowers. However, a recent publication found that a small region of the monoecious chromosome resembles the female chromosome. [2] This is, however, a very small region in the entire chromosome, so more research remains to be done to properly understand the sex chromosomes in Cannabis, for females, males, and hermaphrodites.

Most flowering plants — angiosperms — are hermaphrodites, with both males and females on the same plant, like monoecious Cannabis plants. Dioecy, the separate male and female sexes, exist only in 6% of the taxa, making dioecious Cannabis the curiosity and not the other way around. Dioecy in plants has appeared many times over evolutionary history, where multiple lineages have independently transitioned from hermaphroditism. In other words, dioecy doesn’t come from a common ancestor (monophyly) and plants that are not related to each other can be dioecious. This is the case of papaya, asparagus, and Cannabis, which are not related to each other but are dioecious.

To complicate things even further, another interesting fact regarding sex determination in Cannabis is that males and females can occasionally produce flowers from the opposite sex, showing a plastic sex expression. For a very long time, Cannabis breeders and growers have used agents such as colloidal silver, silver nitrate, or ethephon to ‘reverse’ the sex of the plants. When these chemical agents are applied to the plants, they produce flowers from the opposite sex. This ‘leaky’ or ‘inconstant’ sex expression apparently varies across populations of Cannabis.

This variation means that some individuals can produce a 50/50 ratio of male/female flowers, others only 30/70 or 10/90. All phenotypic (physical) characteristics are a product of genes and environment (nature and nurture). Whether sex expression in Cannabis is more environmentally determined or more genetically determined is yet to be uncovered. Again, more research remains to be done.

Regarding breeders and growers using this sex reversal to their advantage, have you heard about feminized seeds in dispensaries? This is when a female Cannabis plant is forced to produce male flowers using the chemical agents described above, or even by changing other environmental conditions such as light cycle.

There are other environmental triggers that can also induce the production of flowers from the opposite sex in Cannabis plants. These females that produce male flowers and pollen are used to either self-fertilize themselves or to fertilize other females. In this case, the seeds produced by these female-female fertilization events lack a Y chromosome and are called feminized seeds. And although many in the industry sell these seeds with the promise that they are not going to produce any males, this is not entirely true, and some of them can produce males or can produce male flowers when induced. However, the rate/frequency of appearance of males in these feminized seeds has not yet been studied.

This plastic sex expression suggests that, in Cannabis as in other plant species, gender might be better viewed in a quantitative scale. Therefore, it’s not a binary trait with two possible states such as 1 and 0, but more of a continuous trait that could be measured in a relative way such as how much allocation is given by an individual plant to the sexual function (as above: 30/70 or 10/90, or 50/50). This plastic sex expression, also called sexual disphasy, may indicate that sex can be determined not only by the presence of the X or Y chromosomes (genetic dimorphism), but by genes that are expressed differently by individuals due to an environmental response. In other words, this sex expression may vary on the multiple individuals depending on the environment.

Dr. Daniela Vergara is a member of the Cornell Cooperative Extension, the founder and director of the non-profit organization Agricultural Genomics Foundation that aims to bring Cannabis science to the general public through the podcast ‘Cannabis Science Today’ (@cannabis_science_today), through courses offered at the University of Colorado-Boulder, and through blogposts. Your donations help us keep this Cannabis education ongoing and are tax-exempt. Follow Dr. Vergara on twitter or Instagram @CannaBacana

Image Credit: “Cannabis” by DonGoofy is licensed under CC BY 2.0