You may have noticed, Strainly allows you to offer genetics under the form of tissue cultures. While seeds and clones have been quite common starting material among growers, micro propagation is fairly new in the cannabis world. What is “TC”? What type of benefits will it bring to propagation and cultivation? How tissue culture will impact the cannabis industry?… We’ll try to answer these questions, among others in this article…

With its gradual legalization, cannabis production scaled and modernized quickly over the past 10 years.  As part of this transition to industrial horticulture, new challenges appeared, along with some innovative attempts to address them. One of them is Plant Tissue Culture, a technique already used in traditional horticulture, but still pretty new in the cannabis world.

Tissue Culture is commonly defined as “the controlled aseptic culturing of whole plants, plant cells, tissues, organs and protoplasts”. “Aseptic” means free from contaminates such as insects, germs or pathogens. The process for introducing plant cells into in vitro culture is rather simple, in theory.

The explant, a small section of the plant, is cleaned and placed into a sterilized receptacle containing a media substrate of agar, sugars and chemicals slowing the growth of the plant.  When it comes to cannabis, we take a micro node  from the original plant and place it in a sterile test tube. 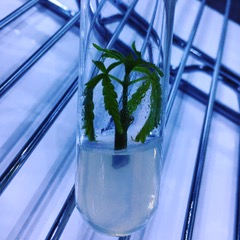 About two weeks later, the node has grown into a rootless plantlet.  Under the right conditions, the plantlet can be divided endlessly into other micro-clones.

At this point, there are 2 possibilities:

In-vitro plant cells culture is the starting point of various horticultural and biotechnological processes.  It is commonly used for other plants than cannabis, but this is changing. As cultivators need increasingly large quantities of clean and consistent starting materials with short lead times, cannabis tissue culture has seen increased investments and developments in recent years.

The propagation of nodes is usually used for mass production of plantlets through in vitro vegetative multiplication in aseptic environment . When it takes weeks to grow a mature enough mother plant that will provide a few clones, tissue culture allows to start from smaller fragments of plants and to multiply them every few days. When done properly, the inventory of starter plants can quickly become abundant. 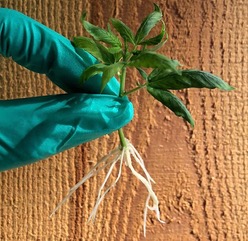 Tissue culture is an interesting alternative propagation approach for several reasons. It allows to propagate plants that are:

While  patent-focused breeders/producers will see tissue culture as a way to store their Intellectual Property for as long as possible, true preservationists should not overlook this option. We have too many examples of great strains that went extinct and that we wish we had been able to keep a backup somewhere.  As tissue culture democratizes, small-farm cultivators and individual growers should be able to keep such backups, for a lot longer. At least, there’s already a platform to offer and source them

Tissue culture is used in crop improvement programs within the “conventional” horticulture. Will it become a new way of creating new strains? A more effective one? What will be the impact on the phenotypes? Because of its cleaner nature, can tissue culture allow a reduction in the use of pest and pathogens management solutions?

IS TISSUE CULTURE A GATEWAY TO GMO CANNABIS?

According to Michael Stevens from Meristematic Labs, “even with the cannabis industry still in its infancy, there are already companies planning on developing transgenic cannabis products. Tissue culture techniques, in combination with highly specialized molecular techniques, have been successfully used to incorporate specific desired traits through gene transfer”… though Mike says we won’t see GMO cannabis products on the market before many years or even decades.

THE FUTURE OF CANNABIS TISSUE CULTURE

When it comes to propagation, time will tell whether affordable tissue culture technology can lower propagation costs for smaller scale producers, helping them to remain competitive and different, in an ever crowded market. That, combined with improved cultivation techniques and equipments represent potential efficiency gains opportunities for all canopy sizes.

With legalization, a growing number of home-growers with less experience may increasingly seek cleaner starter plants and turn to tissue culture providers. Tissue culture may simply be a requirement to meet the large demand for cannabis propagation material ahead of us.

Farming requires lots of water which is why irresp