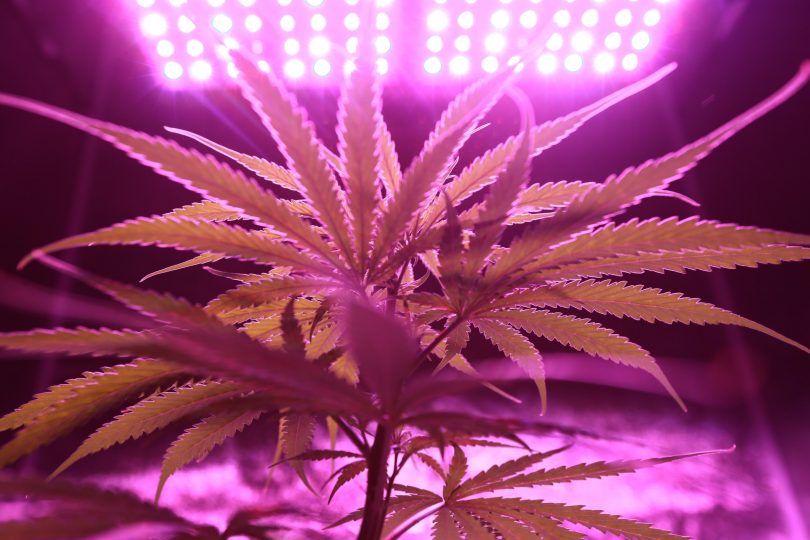 Cannabis harvest yields are directly related to the amount of light they receive. Essentially, the more light a plant gets, the higher its yield will most likely be. Additionally, abundant lighting also leads to flowers with highly developed chemical profiles, depending on the spectrum of light used.

However, the structure and growth patterns of most cannabis plants make it difficult to envelope an entire plant in direct light, be it sunlight or overhead indoor lighting. What normally happens is the uppermost parts of the plant (i.e., the upper canopy) receive the bulk of the light and block the subcanopy plant material from getting the light it needs to reach to produce highly developed buds.

SCL involves the addition of supplemental lights that are focused on the bottom of cannabis plants. To test the efficacy of this strategy, the School of Environmental Sciences at the University of Guelph grew cannabis plants under three different SCL conditions: without lights, with red/blue light-emitting diode (LED) lighting, and with red-green-blue (RGB) LED lighting. [1] As to be expected, the two groups of plants exposed to SCL benefited greatly from the supplemental lighting.

The plants used in the study were clones taken from the same mother (cultivar Wappa). Researchers cut 200 “babies”, allowed them to root for 18 days, and then transferred them into a vegetative phase for 20 days. Afterwards, 140 of the cuttings were chosen for a 56-day bloom phase, during which SCL was applied from day 8 to day 56.

The plants went through two harvesting cycles, each with different environmental/cultivation conditions. For example, cycle 1 plants were pruned in the lower canopy, but cycle 2 plants were not.

During the first cycle, only RGB SCL significantly increased the harvest yield (by 18.9%) compared to the plants that had no SCL. However, in the second crop cycle, both red/blue and RGB showed a significant increase in yield relative to the control crop at 19.8% and 24.5%, respectively.

SCL with both red/blue and RGB resulted in an increase in the concentration of total tetrahydrocannabinol (THC) in the flowers of the lower canopy but only in the second crop cycle. However, concentrations of other cannabinoids, such as cannabidiol (CBD) and cannabigerol (CBG) remained unchanged.

Red/blue and RGB SCL increased the terpene concentrations in the lower canopy during the second cycle. RGB SCL caused a marked increase in α-pinene and borneol in flowers, and RGB and red/blue SCL both showed significant increases in cis-nerolidol. RGB SCL caused an increase in α-pinene, limonene, myrcene, and linalool in the upper canopy as well.

The results of the study demonstrate that SCL is indeed beneficial for cannabis plants and that more studies need to be conducted to understand the impact of the different colors of the light spectrum on cannabinoid and terpene development and yield. What is evident is that both types of SCL had a beneficial effect on yield and that RGB SCL had a significant impact on THC and terpene content. Red-Blue SCL produces a chemical profile that is more homogeneous throughout the plant. [1]